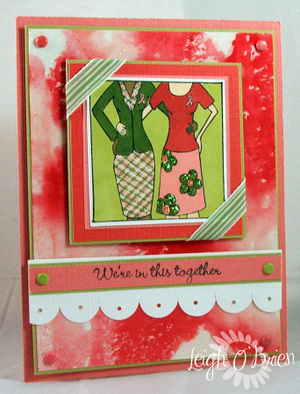 Last week I was working on some backgrounds using the Reinker Splash technique from the February '08 Technique Junkie newsletter.  I had some new stamps to try out and I wanted to make a predominately PINK background.  Having completed the background, I went to work making my card using the Think Pink set from My Favorite Things (I love that set!).  It wasn't until the card was completed and I was posting it that it hit me....was the background a little 'bloody' looking?  EEEK!  CRUD!  How did that happen?!
I posted the card to the TJ Yahoo group with a little note about 'something creepy' on the card.  I didn't tell them what I was thinking and asked them to reply to me if they noticed something strange about the card.  Little did I know that this would be an experiment in psychology!  Kind of like one of those ink blotch tests.  HA!  The replies gave me a whole bunch of giggles so I thought I'd share the card, the silly responses, and the RE-DO cards that I ended up making.

Here are some of the guesses that I received about what might be 'creepy' about this card:

Anyway, I couldn't stop thinking about the card and just had to go back and re-make it.  It ended up becoming two cards that I think are much better.  Stamping the large flower from Impress over the background evens it out and mutes it a bit and the MFT image is now more visible in it's new home too. 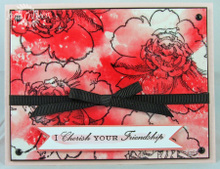 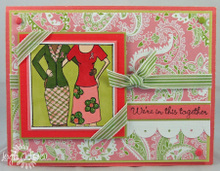 I love this one: "Are you thinking the BG looks like spilt blood and the sentiment suggests the girls are comrades in crime?"

Hahaha! Those answers are too funny! Thanks for some giggles!

thanks for the chuckle! The re-dos look great!

I totally laughed out loud reading those guesses! It was a bit macabre...but you switch it up and now it's a fab bg! Oh, still laughing...

What a giggle!!! All at the expense of a card that actually is not too, too bad...lol
The re-dos are fabulous. You are sooooo good...

Oh my goodness, that is some funny stuff! I guess if we looked hard enough we could make up stuff about nearly everything! LOL

This is only a preview. Your comment has not yet been posted.

The letters and numbers you entered did not match the image. Please try again.

As a final step before posting your comment, enter the letters and numbers you see in the image below. This prevents automated programs from posting comments.

Having trouble reading this image? View an alternate.

(Name and email address are required. Email address will not be displayed with the comment.) 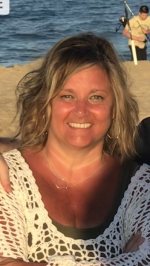 Blog powered by Typepad
Member since 10/2006